What do four way stops tell us about America?

I was driving back home early this afternoon from work ahead of the impeding Snowmageddon!!! (maybe). On the way out of campus, there is a four way stop; and since everyone seemed to have the same idea as I did, there was a bit of a queue to get to the stop. And yet, everybody patiently waited their turn, as cars stopped on the stop sign, let the others who stopped first go first, then go. It is an orderly kind of choreography that, if you haven't seen it before, is quite astounding. 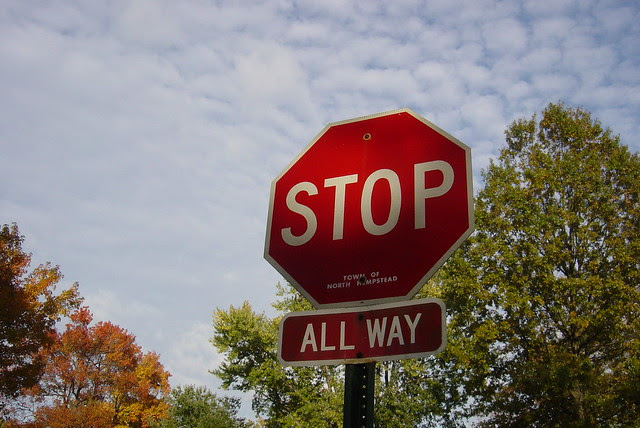 Someone (I forget who) pointed out how four-way stops worked when I first came to the US. I was amazed that it actually worked. There was no policeman to direct traffic, or stoplights to tell you when to go! So used was I to the crazy roads of Manila and my hometown Cotabato. In the Philippines, when there is no stoplight or policeman at a busy intersection, there are basically no rules. Everyone fends for themselves... oftentimes, drivers actually get across an intersection. Of course, at other times, you get a real life deadlock:


The American (it's probably not just American, but I've only noticed it here) four-way stop seems to be much more reasonable: if everyone follows the rules, then everyone will eventually get their way across an intersection. But there's the crux of it: you have to trust that people will follow the rules. And, miracle of miracles, people around here actually do. What is it that we can know about US society from the fact that I can largely trust Americans to stop at a stop sign?
Posted by Roy Tan at 1/17/2012 04:42:00 PM